So much has been said about Yahoo over the recent past, that it seems like a blessing in disguise for Twitter. The laundry list of senior execs leaving has not gone down well either.

However, I do not agree with Mike Arrington when he says that Yahoo should have sold out to Microsoft. I have great respect for Mike but I think he is wrong, and big time at that, about this issue. Maybe the decision seemed to make business sense, but personally I feel that the two companies are so different that merging them together would have been the great disaster since Yahoo’s move with Geocities.

Anyways I would like to agree with a contrarian view put forth by Danny here. And to add to it I have some suggestions. Yahoo currently owns some of the best stuff on the internet.

1. Yahoo Mail – As much as I dislike the service now, loads of people still use Yahoo mail. Provide free POP access. Remove those obscene ads. And think of a better way to monetize it. STOP THE SPAM. Let me say that again. STOP THAT SPAM. And no, Ymail won’t solve your issues here. Also, the RSS reader (does anyone use it??) is a joke. Do away with it.
2. del.icio.us – Yeah, the founder is leaving. But you guys are to blame. Release the new version already. You know what people using it are thinking. Use it. Use it with Answers. Use it with Search. Probabaly integrate with Flickr.
3. Flickr – Again, the founders are leaving. Don’t mess with the product. Its awesome. Think integration with Image search results.
4. Messenger – Cut those stupid ads. Simplify it. Let it do the job. I dont need bull shit on it. Let me talk and chat.
5. Answers – Something I know least about, but have heard awesome stuff about it. Let it be.
6. Finance – Good as is. Let it be.

Get back into the game by getting back those users who used to swear by Yahoo at a point of time. You can always look at better ways of monetizing. Get rid of non-committed people. Don’t let go off good ones. Get rid of pro email. Perhaps you missed the memo but people have stopped paying for it ages back!! Get rid of competing products. Get rid of stupid execs. Focus on technology, the money will follow. You don’t need to do everything. Get rid of non-core products. Slim down and focus your energies.

I grew up on the internet with you folks. Don’t throw in the towel just yet. Stop eating peanut butter.

I remember having a conversation with a Yahoo! friend of mine, a month and a half back,  in which we debated the integration of Del.icio.us bookmarks in Yahoo! Search results.

Man sues Yahoo and Google for taking their names from the tribes he has descended from.

A man currently being detained by immigration in Houston, TX has filed a lawsuit claiming Yahoo and Google stole their names from Tanzanian tribes. As luck would have it, the man is a descendant of both tribes – what are the odds?

The lawsuit states that Google was taken from the Gogo tribe, and Yahoo from the Yao tribe. The claim is asking for $10,000 be paid to each tribe member for the past three generations.

Don’t you wonder who edits their front page headlines? 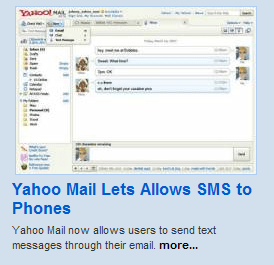