It had been a long time since Lagaan roused those patriotic feelings in you by a means other than bashing Pakistan. Is it a coincidence that it again required an Aamir movie to do it. But only this time Bhuvan did not hog most of the screen time nor did he hit the winning six. And that to me is the USP of the movie. The movie has no big names other than Aamir or Rehman but still manages to emerge out of the shadows of both. 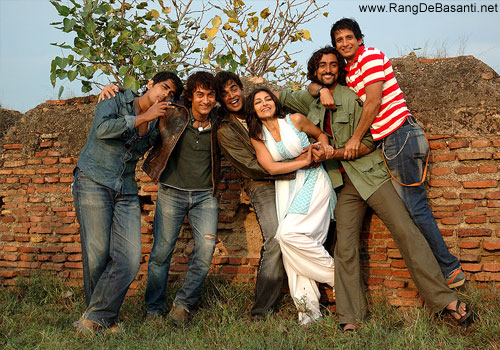 The direction of Mehra is outstanding and the sepia touch while shooting is just mind blowing. 10 on 10 to him for that. The music by Rehman is soulful yet feet tapping and cannot be said enough about. But the songs sounded better to me after watching the movie (Iris (City of Angels) was the only other example). I just love Khalbali and Roobaroo. Also none of the characters ever sing a song in the movie. Brilliant!!! (Is it a first???)

The story moves with a very fast pace and movie mixes the past and the present very well. The murder planning scene on the roof is perhaps the best one on the scene. The movie also brings out the anger in todays youth very well. I specially loved the scene where Aamir cribs about how the system controls you outside the boundary of the college (brought back the memories of my psentisem).

The part with Atul Kulkarni and Kunal Kappor in the jail is also very well made. Also the end of the movie touches you and the fact that Karan kills his father is a masterstroke. 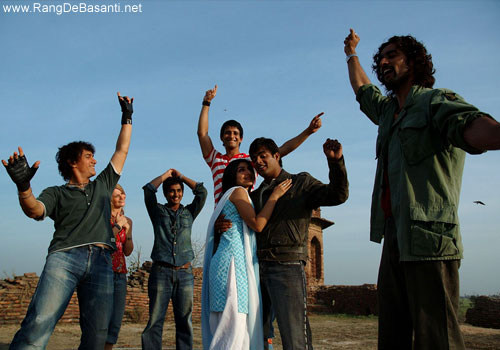 The scene where Karan (played by Siddharth) wakes up after the India Gate vision absolutely blows you away. Atul Kulkarni (as Laxman Pandey) keeps improving movie after movie and seems to me one of the Nana Patekar mould. Kunal Kapoor plays his part as Aslam to perfection is my choice for the best actor in the movie. Soha Ali (Sonia), Kiron (Mitron) and Anupam Kher (I guess this is the first movie where both have been cast together) are good in their small parts. Coming to Alice Patten (Sue). Her accent is believable and her acting top notch.

Overall I would give the movie 9 on 10. A def must watch. Another piece of advice. Please watch it in a theater not on TV. It deserves the big screen.

Update: I have fallen in love with the song Luka Chuppi (Lata and Rehman dazzle)!!