Saturday morning – I wake at 4AM. Take bath. Try waking Bansal. Bansal says, “Wake up Modi.” Woke Modi up. Try waking Bansal. Bansal says, “Call the driver.” Called the driver. He says he would be there in half and hour. Wake up Bansal. Bansal says, “Uffo!!” and wakes up after I constantly perster him. It is raining like crazy. But we start from home at 5. Pick up Modi and some shawls. Pick up the gift from office. So final start from Gurgaon, henceforth GGN, is at 5:30AM. Neways Delhi has crappy slow traffic due to heavy rains. And we start getting delayed. But since the car was Innova Bansal was asleep and me too. Modi was not complaining.

Bansal wakes up and is immediately hungry. Further he says he will only have Pakoras (and repeated that every time he woke up for a bit) since it is raining and in the while that we find a restaurant he says he will make do with a kilo of Amroods. Finally stop at one of those restaurants at Reliance Petrol Pumps. Great restaurant. Decently priced and Modi was happy since he got Gudang Garam (some brand of cigs you don’t get in GGN). This is around 10. Then I call up Parul to find out there plans. She says they are about to start for DDN from Saharanpur and we though we would get straight to DDN. Meanwhile, it is still raining like crazy. We are all cold in the cab. The road is filled with broken trees and we keep getting delayed. Finally reach DDN at 2. I needed to buy a pair of sandals to go with the kurta so we do that. Then have some famous Kulfi-falooda. Call up Pinki’s home to find out where we could rest for a while and head off to the guest house (it is just opposite the Vidhansabha, which hardly looks like one).

After resting me and Modi are hungry and all three head off to DDN marketplace to eat. Stop at Yo!China and have some food. And then come back to the guesthouse. Meanwhile, Parul, Shammi, Munal, Raheem, Vasutaa, Rahul Singh, Subhangi and one more female were at the guest house. So come back and start chatting etc. was arnd 6 when someone from the family came and told us to start getting ready. We let the girls do that first. Meanwhile we go get our stuff ironed. Come back. Girls still dressing (expected). We chat for some more time and get ready too. Then Pratyush and few juniors (including Neharika) arrive from Pilani. Then go to the wedding place (celebration gardens). Starts to drizzle lightly after the baarat comes in and we hope that it stops, which it does. We all go meet Pinki after the varmaala thing. That is when the snap was taken. Then the non GGN people start dancing. Me and Bansal and Modi stay off due to sore backs and necks. 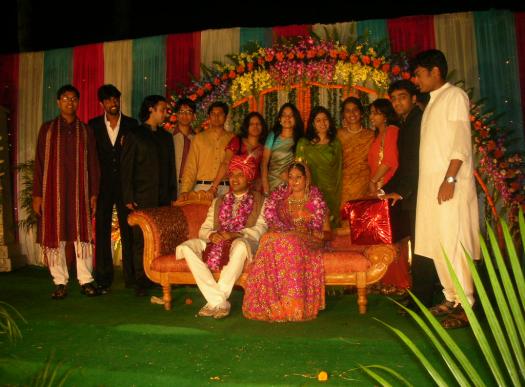 Uske baad khana. Then chat some more. Then Pinki was sitting alone, just before pheras. So we go chat with her. I am properly introduced to her husband. He says “Hi, I am amit.”. I say, “Weel, You can call me Goyal”. Meanwhile, we keep calling Tarun, Bansal and lot of heads turn at that.

Parul has a train at 4:30 and Munal a flight at 12. So we decided earlier that we would start early. We start from DDN at arnd 3:15, just before the pheras began. Parul majorly upset about losing her hairband. And cribs a lot. Neways we start. Me and Parul on backseat. And us knowing the history of Modi and Munal decide to give them some privacy on middle seat. Bansal up front. Cab mein office ke funny incidents ki baatein hoti rahi till most fell asleep. Sometime around 6 Bansal wants to get some sleep and I change places. Everyone still asleep. We get to Delhi at around 9:30. Munal and Pari are hungry. We have a crappy breakfast at some Rameshwars chain restaurant in SouthEx. Then head to Airport to drop off Munal. Wahan baith ke gappe maari. Parul by now was majorly upset about the hair band (seriously is it such a big deal?? would Nadal crib as much??) and was not laughing even at great jokes.

Munal ko arnd 12:15 see off maarke we head to C’Not Place (now Rajiv Chowk). Wahan after a lot of fight we find Barista. I order a nice Peach ice tea and a donut, Bansal a choclate temptation (and complains about too much chocolate!! I mean what was he thinking, he even had it from Parul before ordering) and a cold coffee. Pari wanted to have beer but had to settle for some coffee instead. Parul, who was treating, had some coffee and chocolate temptation. After that we go on a hairband hunt. Entire C’Not and entire Palika Bazaar chan maara. Usko ek “decent” hairband nahi mila. Thak haar ke we head back to the cab and drop Parul at the station at 3:15 I guess.

We then head back home and sleep immediately. Wake up. Watch Agassi lose (what a crappy day) and go off to sleep again.

Update: Paritosh was offended by the post (as you can see in the comments) and this is to inform that the author had no malicious intent whatsoever and whatever has been said was just innocent leg pulling stuff.

What I forgot to mention was that both Pari and Bansal were extremely pissed off at the entire fruitless exercise of roaming around in C’Not. Bansal because he did not understand what was so great about Barista that we were so desperate about locating it. Pari because we overlooked a number of restaurants/bars that were advertising the facts that Happy Hours were on and beer in such heat was a thought that would have cheered him.

Also he (Pari) wanted me to mention the gala time we had at Palika Bazaar. Now for those who haven’t been to Palika in a long time, it has changed. While it still does stock foreign goods of questionable origin it also stock a few more stuff. Most noticeable are gaming devices and CDs/DVDs. Now the CDs/DVDs are of multiple types. CDs with games. CDs with movies. And CDs of a more exotic variety. While on an ordinary day I would not have noticed them, since I was walking around with Parul, the fact that shop keepers were calling me out to have a look at the more interesting stuff was, well, kind of awkward. Though I was walking aage aage with Parul, Bansal and Pari were left behind and Pari informs me that the same shopkeepers were very sure that Bansal would be definitely interested in their goods. Most interesting was a shop that had a poster of Maa Saraswati on the bottom half of its couter and CDs/DVDs named with various combinations of “Jawani, Dewani, Kamsin, Pyaasi, Hasina, Padosan” etc.

While this is true, a lot of shops also advertised the pirated versions of movies like Capote, Crash, and many more Oscar winners/nominations. I should check out the stuff they have sometime.